The Italian monarchy was first established in the year 1,000 and was abolished on June 12, 1946, when the Kingdom of Italy formally came to an end when the king transferred his powers to Prime Minister Alcide de Gasperi and called for the Italian people to support the new republic.

The Italian monarchy was founded by Humber I, Count of Savoy. They maintained their power through the years and were known as the House of Savoy.

The name derives from the historical region of Savoy in the Alpine region between what is now France and Italy. Over time, the House of Savoy expanded its territory and influence through judicious marriages and international diplomacy. From the rule of a small region on the French/Italian border, the dynasty’s realm grew to include nearly all of the Italian Peninsula by the time of its deposition.

The last king was Umberto. After turning over his powers, he went into exile in Portugal, never to return to his beloved country. He died in 1983.

The titles that go with the House of Savoy include:

Under the Constitution of the Italian Republic, the republican form of government cannot be changed by constitutional amendment, thus forbidding any attempt to restore the monarchy short of adoption of an entirely new constitution. The constitution also forbade male descendants of the House of Savoy from entering Italy.

This provision was removed in 2002 but as part of the deal to be allowed back into Italy, Vittorio Emanuele, the last claimant to the House of Savoy, renounced all claims to the throne. 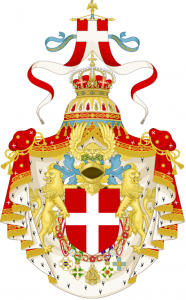 The Residences of the Royal House of Savoy in Turin and the neighborhood are protected as a World Heritage Site. Although the titles and distinctions of the Italian royal family are not legally recognized by the Italian Republic, the remaining members of the House of Savoy, like dynasties of other abolished monarchies, still use some of the various titles they acquired over the millennium of their reign prior to the republic’s establishment, including Duke of Savoy, “Prince of Naples” previously conferred by Joseph Bonaparte to be hereditary on his children and grandchildren, Prince of Piedmont and Duke of Aosta.

So just who is next in line for the Italian throne? It depends on which side of the fence you are on. There is Prince Amedeo and Prince Vittorio both claim the title as the current head of the House of Savoy.

Currently, the leadership of the House of Savoy is contested by two cousins: Vittorio Emanuele, Prince of Naples, who used to claim the title of King of Italy, and Prince Amedeo, Duke of Aosta, who still claims the title of Duke of Savoy.

Prince Aimone, Duke of Puglia, declined to meet for an interview in the Tuscan country estate of his father, Prince Amedeo, Duke of Aosta, who was reportedly punched twice in the face by his cousin, Vittorio Emanuele, at the 2004 wedding of the future King Felipe VI of Spain. Soon after that altercation, Amedeo claimed to be the legitimate Duke of Savoy.

“To put it mildly, it is not a good relationship,” Aimone said in a phone interview. But he said he wanted to avoid a public shouting match with his cousins “over something that doesn’t exist. I try to be more dignified if possible given the great responsibility of such a name.”

Vittorio Emanuele was born on February 12, 1937, in Naples to Umberto, Prince of Piedmont, who would later become the last King of Italy as Umberto II, and Princess Marie-José of Belgium.

Amedeo was born at Villa della Cisterna in Florence, the only child of Prince Aimone, Duke of Aosta, formerly designated king of Croatia as Tomislav II, and of Princess Irene of Greece and Denmark.

It’s the Prince of Naples vs the Duke of Aosta. So who is correct? That’s a very complicated answer.

The patrilineal lineage of the House of Savoy was reduced to four males between 1996 and 2009. In 2008 Aimone of Savoy-Aosta married Princess Olga of Greece, his second cousin, and they became the parents of sons Umberto and Amedeo born, respectively, in 2009 and 2011.

But in 2002, Vittorio Emanuele renounced all claims to the throne, which is why he was allowed back in Italy.

In addition to that on July 7, 2006, Vittorio Emanuele, Prince of Naples had lost his dynastic rights (or so his cousin claims) when he married in 1971 without the legally required permission of King Umberto II.

I’m not a lawyer, so I can’t say for sure who is next in line to the Italian throne “legally”. All I can do is present your options.

The Italian Royal Line of Succession

As the monarchy favors male-line heirs, that means the next in line for the Italian throne under this line would be Prince Aimone of Savoy-Aosta, Duke of Apulia.

So that makes the line of succession …. 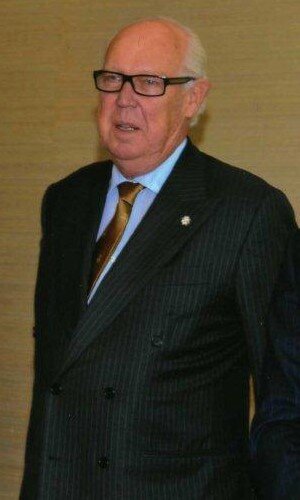 Vittorio Emanuele, Prince of Naples has one child.

Emanuele Filiberto of Savoy, Prince of Venice has two children, both females.

So that makes the line of succession ….

Emanuele Filiberto is, by strict primogeniture in the male-line, the heir apparent of the House of Savoy. This means however that his children, who are both daughters, are not in line for the throne.

An interesting side note to the dispute – Vittorio Emanuele and his son Emanuele Filiberto applied for judicial intervention to forbid Amedeo from using the title Duke of Savoy.

In February 2010, the court of Arezzo ruled that the Duke of Aosta and his son must pay damages totaling 50,000 euros to their cousins and cease using the surname Savoy instead of Savoy-Aosta.

The Duke of Aosta appealed the ruling and the dynastic dispute is still unresolved, but it could give weight to the claim of Vittorio Emanuele being the legitimate head of the House of Savoy.

The court had consulted a professor of Canon and Ecclesial Law at the University of Palermo, as as a member of the presidential council of the Collegio Araldico before making its ruling in favor of Vittorio Emanuele.

The legal matter is currently awaiting a decision by the court of appeal of Florence.