As American’s we often find ourselves wondering about the life of the royal family, and it’s not always easy for us to understand how things are done. I thought I would use this page to answer some of the most frequently asked questions.

Now that females can rule in their own right, does that change the line of succession? Is Princess Anne now the heir apparent?

The only real major change for current people on the list is that it restores a handful of distant relatives there were once excluded for marrying a Catholic. For example, George Windsor, Earl of St Andrews, who married a Catholic in 1988 was restored in 35th place after the Duke of Kent. However that being said, the British monarch is head of the Protestant Church of England so the requirement remains that only Protestants can be in the line of succession. The current line of succession to the British Throne is given below. So while you can marry a Catholic you can’t be one and still be in line for the throne.

How long has the House of Windsor been on the throne?

Queen Elizabeth the II became Queen of England in 1952. She is from the house of Windsor. The House of Windsor dates back to King Edward VII who was King starting in 1901. However you should keep in mind that the way royals intermarry, she can trace her ancestry back much further than that.

To be considered a member of the Royal family officially (as to legally be able to rule the country), you must be able to trace your ancestry to Princess Sophia, the granddaughter of James I.

But to be a Windsor you would need to trade your family ancestry to King Edward VII.

Why is Prince Philip only a Prince and not a King?

Because the title “King” would mean he was higher in rank to the Queen. Well, kind of. Usually the term “King” refers to a reining king and not the non-reigning spouse. Yet confusingly enough, when Prince William becomes King, Kate Middleton will be called Queen, although she will actually been a queen consort, the non-reigning wife of the reigning king.

But long story short, the husband of a reining queen is always known as a Prince consort. He could never rule the country in his own right.

And to make matters even more confusing, it has nothing to do with him being a royal or not because Prince Philip is of royal blood. In fact he has a pretty fancy pedigree of his own. He was born into Greek and Danish royal families. He also has ties to the infamous Tsar Nicholas II of Russia.

Grand Duchess Olga Constantinovna, granddaughter of Tsar Nicholas I, married King George I of Greece. Among her descendants is none other than Prince Philip. In fact when they found some the remains who they thought might be the Romanov children, it was Prince Phillip they went to, to do a DNA comparison and confirm in fact the bones they found belong to the Romanov children.

Do royals still have to ask Queen Elizabeth for permission to marry? Or was that just something done in the movies?

That was a real thing. It was part of what was called the Royal Marriages Act of 1772. But as of 2013 now only the first 6 people in line to the throne require the Sovereign’s approval to marry. However that being said, the royal family is still very close and it woudln’t be unusual for any member of the royal family to at least get the opinion of their family, including the queen. This is especially the case for any dynast, you always after all want to remain in the good graces of the Queen.

Why doesn’t Zara Phillips have a royal title?

She might have had a title but when her father Captain mark Phillips married her mother, Princess Anne, he turned down the offered earldom (or so the rumor goes). Had he taken the earldom then Zara Phillips would be Lady Zara Phillips instead of just Zara Phillips. She would not have been Princess Zara because only children born on male heirs will have their children known as prince or princess. Since Zara’s the daughter of a princess she therefore would not be automatically known as a princess.  All of that being said, at any time the Queen could in fact make her a princess or give her any other title if she so felt the need.

Why are some members of the royal family styled His or Her Royal Highness, and some are not?

By royal decree known as a letters patent issued in 1917, which is still in force to this day, all male-line grandchildren of a monarch are assigned a princely status and the style of Royal Highness. So if a member of the royal family is not called HRH that means that a) are a child or grandchild of a Princess or b) a child of a Prince but some other ruling came into play such is the case of James, Viscount Severn. He is the son HRH Prince Edward – Queen Elizabeth’s youngest son.

Normally any children Prince Edward would have would automatically styled HRH however when Prince Edward married in 1999, the Queen made him the Earl of Wessex, much like she made Prince William the Duke of Cambridge, when he married Kate Middleton.

When the Queen made Prince Edward the Earl of Wessex, she also stated that all of his children would be styled as the children of an earl, rather than princes or princesses. I’m not sure why this was done, but perhaps it was because he was so far down the line of succession.

Why is Kate Middleton not in the line of succession?

Catherine, Duchess of Cambridge is the wife of Prince William and will one day be Queen but can never rule in her own right like Queen Elizabeth. Kate Middleton will actually be a Queen Consort and not a ruling Queen. Like with Philip, the Duke of Edinburgh, she will be royal by marriage. Even though Prince Philip is married to the Queen, if she dies, the crown passes to Prince Charles, her heir not her husband. In other words, Kate is married to a royal, and is not a Windsor by blood.

Can a member of the royal family marry anyone they want?

Yes and no. For the most part yes, but the exception to the rule is the first 6 persons in line to the throne. They must obtain the sovereign’s approval before marrying. If they don’t for some reason and marry without the Sovereign’s consent, it will disqualify the person and their descendants from that marriage from succeeding to the Crown. In other words, if they don’t get the Queen’s permission, they and all of their future children are taken out of the line of succession.

What is a dynast?

It’s a member of a reigning family who retains a right to succeed to a throne. It’s often a term used in association with marriage or the rules of a dynastic marriage which is basically one that meets all the monarchical laws and restrictions so that their children are eligible to inherit the throne or be in the line of succession.

How does the British royal family support itself?

The eldest son of the the reigning British monarch inherits possession of the Duke of Cornwall at birth or when his parents succeeds to the throne. The Duchy of Cornwall is about 135,000 acres and is worth almost a billion dollars. It generates about $23 million a year in income.

It’s actually worth more than the one the Queen owns. The Duchy of Lancaster is only worth about $580 million and brings in about $19 million a year in income.

Yes we do. It’s located at royallineofsuccession.com/privacy.

When is the appropriate time to wear a tiara?

Royal etiquette dictates that it’s appropriate for a female to wear a tiara to any event if held indoors after 6 pm. Female members of the royal family, including the queen will wear a hat during any formal daytime event. 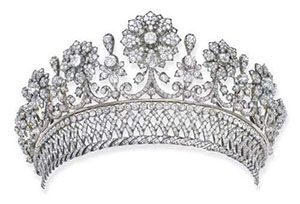 You’ll also note that only married ladies wear tiaras. For married ladies it was a sign of status and would show you were taken and not looking for a husband. For the gentleman it was a clear sign not to make advances toward the lady in question.

Now that Prince Harry is married, are there any single Prince’s left?

Turns out there are more than a few! As of June 17, 2018 here are some rich, royal and single men and one of them is even a real King!