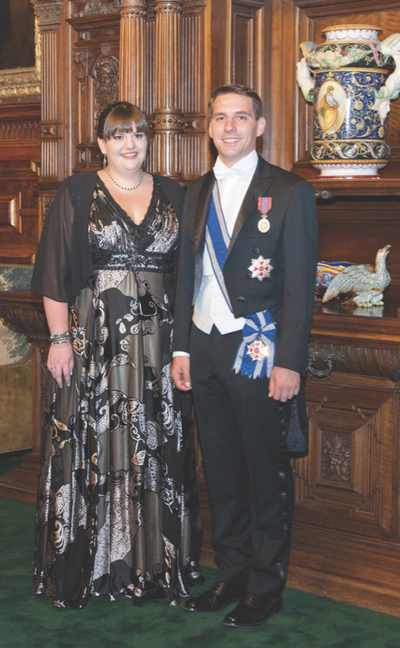 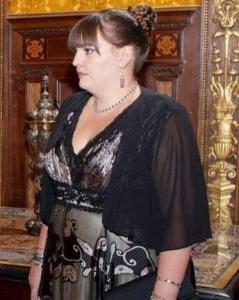 She is the daughter of Princess Elena of Romania and Dr. Leslie Robin Medforth-Mills. Elisabeta Karina is now 2nd in line to the now-defunct Romanian throne, as her elder brother Nicholas was removed from the line of succession by their grandfather, King Michael of Romania.

Her father was born in Yorkshire, England. He graduated from Durham University with a BA degree in Geography. He subsequently obtained a Ph.D. and later became a professor of geography at the University of Durham. He died on February 2, 2002.

He married Princess Elena von Hohenzollern-Sigmaringen, Princess of Romania (daughter of King Michael of Romania), on July 20, 1983, in Durham, England, in a civil marriage. They were remarried on September 24th of that same year in a religious ceremony in Lausanne, Switzerland. He and Elena von Hohenzollern-Sigmaringen, Princess of Romania, were divorced on November 28, 1991, in Sutherland, Scotland, when Elisabeta was just two years old.

One of Elisabeta Karina Medforth-Mill’s godparents was British novelist Dame Catherine Cookson, who died when she was only 9 years old. She is in the top 20 of most widely read British novelists with sales topping 100 million. Many of Cookson’s novels have been adapted for film, radio, and the stage.

There are very few pictures of Elisabeta, but we found one from years ago where she is pictured with her brother and her grandfather, King Michael, from 2008. 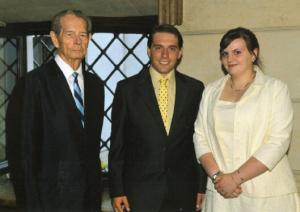 Here she is pictured with her brother. 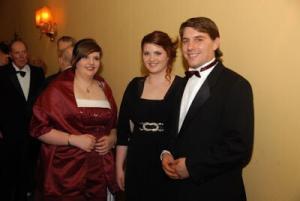 She did attend her brother’s wedding in 2018, as is pictured on the far left. 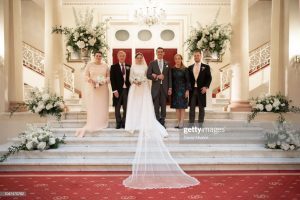 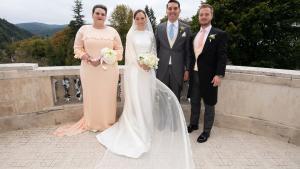 It is unclear if Princess Elisabeta Karina is married and has children and therefore heirs of her own, or where she even lives. She was most likely born in Switzerland and then grew up in England at Flass Hall, but would return to Switzerland to visit with her maternal grandparents throughout her childhood.

It’s said she doesn’t speak Romanian but did visit the country more than a few times. She didn’t appear to have any desire to live the royal life and did not attend any of the events dedicated to her grandfather’s birthday (King Michael). She didn’t grow up as a royal, and she doesn’t move in royal circles. She lives quietly in the UK. Her father (who died in 2002) was a British professor of geography at the University of Durham and a United Nations official.

Elisabeta is not only in line for the British throne but also the Romanian throne as well. Her mother is first in line, and she is 2nd. Right now the head of the Romanian Royal Family (the custodian of the crown) is Elisabeta Karina Medforth-Mills’ aunt, Her Majesty, Margareta of Romania. She has no heirs so next the crown will pass to Elisabeta’s mother, and then next in line is Elisabeta herself.

However, I should point out this is in the title only. The Romanian crown is now defunct. Her grandfather Michael, was the last king of Romania. The Romanian royal family is not recognized by the Romanian government and lacks legal validity without approval by Romania’s Parliament.

That being said, when it comes her time, Elisabeta Karina Medforth-Mills will be the rightful Custodian of the Crown of Romania, as a representative of the House of Hohenzollern.